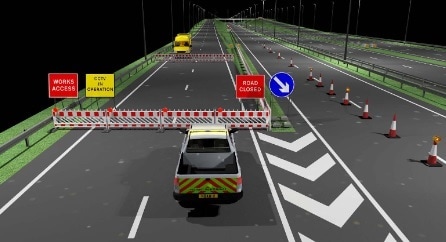 A key Highways England objective is to improve safety so that no one is harmed when travelling or working on the strategic road network. The Incursions Working Group’s primary focus is to take action to minimise the risk of incursions and as part of this work the group has been studying data on the rate of incursions to help inform their work and in particular identify root causes. Current data on AIRSweb (the Highways England accident reporting data base) indicates that in 2015 there were 365 vehicle incursions into road works. In 2016 this number increased to over 900 incursions. This could be in part, due to better reporting and recording on AIRSweb but it is recognised by all that these numbers represent the tip of the iceberg. The group continues to promote the prompt and accurate reporting of incursions first of all by the workforce to their supervisors and managers and then by the Health & Safety Teams working on Highways England contracts and project onto AIRSweb. Guidance is available in the AIRSweb section of this website for users with regards to the proper recording of incursions and the fields on the system which must be completed. It is also important that the data collected via this platform is shared with the widest possible audience of stakeholders. Data is now available on a spread sheet for the period of January 2016 to February 2017. It is organised to enable filtering on different areas and shows detail of why the incursion occurred.
​
Incursions In To Roadworks Training Videos

Vehicle incursions are one of the most common hazards faced by our roadworkers, on average 300 incursions are reported per month and the potential for multiple injuries or fatalities makes it a high risk.

There are many different threat lines to an incursion occurring, the industry has collaborated on a series of preventative and mitigative controls as detailed in Raising The Bar 27 Managing Temporary Traffic Management Incursions;

Download File
In collaboration with 18 highways businesses, a series of 13 short films produced by members of the national incursions working group. Aimed at our designers, managers and traffic management operatives, these films provide guidance on how to design, plan and install effective control measures, technology which is available, and how to report an incursion. These films are designed to be used within training, and in briefings at the start of shifts to help keep the everyone on site safe from incursions.

We are expecting through the application of this learning that the number of incursion reports will go up as workers realise that incursions are not acceptable, then to decrease as implementation of controls, awareness and enforcement action starts to take effect.

Links to RtB27 - Managing temporary traffic management incursions films:
‘I am doing my bit to make the roads safer and better for everyone. Please do your bit too, so we all get home safe and well.’
James Bird ¦ Senior SHE Manager ¦ Kier strategic highways
​
Road Worker Safety Video - #RespectOurRoadworkers, let’s get them home safe and well

A short video LINK has been produced to educate the public that driving into roadworks puts construction and maintenance workers at risk and that they should abide by roadwork markings.

The video has been made and funded by 18 members of Highways England’s supply chain, who are credited at the end of the film. The video shows the danger of incursions and highlights that the people working behind road cones have as much right to get home safe and well as everyone else.

This video will coincide with a series of 13 short films produced by members of the national incursions working group. These short films aim to educate construction and maintenance workers about what to do if someone drives (or walks) into works. These videos are designed to be used in training, and in briefings at the start of shifts to help keep the people on site safe from incursions.
​
Incursions Update September 2021

Overall in September 2021, incursions to 'Seek Benefit' was ranked first with 74, followed by 'Driver confused' as second with 31 incursions, and third being 'Breach of Rolling Roadblock (TOS)' with 15 instances. 'Result of accident' incursions is ranked as fourth with 5 instances, with the fifth being 'Seek Information' with 4 instances, and sixth being 'Follow-In' with 2 instances. There were 243 incursions 'Because of Breakdown' also recorded.

2 'IPV Strike' were recorded this month.

Our Major Projects recorded the following this month -
'Seek Benefit' type incursion was the greatest number recorded with 29 and ranked first. This was followed by 9 instances of 'Driver confused' incursions  and ranked third is 'Result of accident' with 3 instances. 'Breach of Rolling Roadblock (TOS)' incursions is ranked as fourth with 1 instance, 0 [nil] incursions as a 'Follow-In' have been reported, and finally, 0 [nil] incursions resulting from 'Seek Information' being recorded. There were 243 incursions 'Because of Breakdown' also recorded.

Our Operations Directorate & DBFO's recorded the following this month -
'Seek Benefit' type incursion was the greatest number recorded with 32 and ranked first. This was followed by 12 instances of 'Driver confused' incursions  and ranked third is 'Seek Information' with 3 instances. 'Follow-In' incursions is ranked as fourth with 2 instances, with the fifth being 'Result of accident' with 1 instance, and finally, 0 [nil] incursions resulting from 'Breach of Rolling Roadblock (TOS)' being recorded. No [zero] incursions 'Because of Breakdown' were recorded this month.

There was 2 'IPV Strike' recorded this month.

Our Traffic Officer Service recorded the following this month -
'Breach of Rolling Roadblock (TOS)' type incursion was the greatest number recorded with 14 and ranked first. This was followed by 11 instances of 'Seek Benefit' incursions  and ranked third is 'Driver confused' with 10 instances. 'Result of accident' incursions is ranked fourth with 1 instance, with the fifth being 'Seek Information' with 1 instance, and finally, no [zero] incursions resulting from 'Follow-In' being recorded. No [zero] incursions 'Because of Breakdown' were recorded this month.

In Operations and excluding breakdown type incursions, ‘To Seek Benefit’ incursions were highest with 10 in Area 9 and 8 on DBFO (Area 5).

The majority of historical incursions added in September were because of breakdown (27), with 4 ‘Seeking Benefit’, 2 of ‘Driver Confused’, 1 ‘Follow In’ and 2 as a ‘Result of an Accident’.
Resources

Coning In and Out